A beautiful summer's day was in prospect as the temperature soared to 25C by mid-afternoon. This was the temperature in my car as I put my bike into it for the journey home. Ken was doing likewise at about 1530 as John W and Ivan were debating whether to wait for the train at 1600 or dash for home (which they did).

Ivan had suggested a 57 miler to Wem, so the four of us set off at a pace on a long straight run to West Felton and thence to Nesscliffe, Little and Great Ness as finally we turned North West towards Wem. We passed through Harmer Hill at 1200 and shortly were looking for Josamya's cafe in Wem. Unfortunately it was shut! – so I suggested the Maypole Court Cafe Bistro which is carefully hidden just off the High Street. (NB: OK for small numbers)

This cafe had a range of lunch time favourites and soon three came out of the kitchen but the fourth (aka Ivan's lunch) had been missed off the kitchen to-do list. The waiter said it would take a little more time, but it would now not be charged to Ivan. Ivan had another beer to pass the time. Overall the food was good, and the late delivery response was impressive.

We left bound for Press Green before turning back westwards on somewhat familiar lanes to take in Prees, Whixall and Northwood. After Lyneal, we ride passed Colmere lake where the photos were taken. It could have been France with the vineyard on one side of the road and the lake and picnic area on the other side. 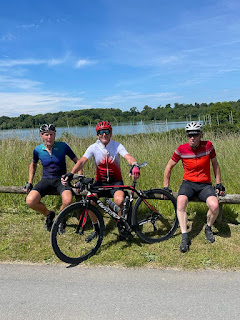 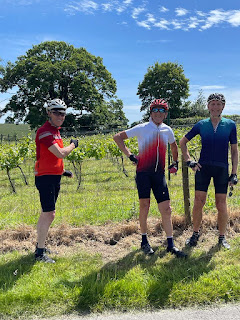 After Tetchill, it was a long upward lane into St Martins before dropping down to the A5 roundabout (which was jammed with cars going towards Wrexham) before wending our way up the hill and back into Chirk by 1515.

Some wonderful, quiet and  long lanes today – some even smooth surfaced. A wonderful spin through beautiful Shropshire countryside with no incidents at all. A great route and a great day out at 57 miles at 16.5 mph average.

So it is thanks to Ivan for the route, and John for the photos and Ken for his company.