There was a good turnout of mods at Ness Gardens today, the fast boys were absent, possibly doing an alternative start venue. Jim D, Dave M and Steve Ha had all chosen to ride to the start venue, then do their own thing back. Trust you had a good return ride lads.

Alan had a route using the tried and tested route out to New Brighton but with an alternative route back via Bidston Landican. So six intrepid mods consisting of Dave H, Neil T, Alan (leader and boss man) George, Trevor and Steve Hu.

Alans route started with the “plunge” back down to the marsh and a gentle coastal bimble to Parkgate. At this point we had our first parting of ways as Steve Hu following his computer took the Wirral Way to Parkgate only to look in his mirrors to see no one had followed. Alan having developed a cunning route to avoid the dusty Wirral Way. Back together the Sextuplets set off along boathouse lane and then on the steady pull up to Heswall. By this time it was clear Alans computer was playing a game of “I bet you can’t guess where we are going next” Neils computer had lost signal so maybe we were at the centre of a denial of service aimed at thwarting the CER day out. However normal service was resumed and we briskly whistled though Irby Frankby and into the lovely town of Hoylake. Hugging the coast we cruised through Meols and then used the scenic sea wall route, which apart from the occasional pockets of sand afforded us a quiet route to New Brighton.

As we approached New Brighton the subject turned to our lunch stop, would it be “The Chippy or Wetherspoons” In the event our decision was made easier by Spoons being closed for refurbishment. The Seaside Cafe provided a super £8.95 special of Fish Chips Salad Bread & Butter plus a drink. Furthermore the young lady serving us found Alans name to be particularly attractive there followed Neill (Alan 2) and Steve (Alan3) all being served huge portions and great smiles. 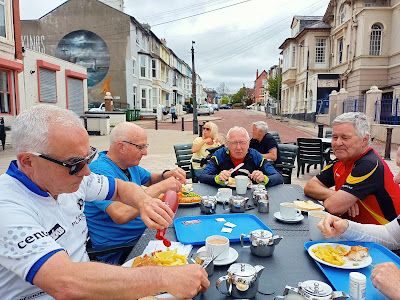 Full of seaside fare we back tracked for about a mile along the sea front. At this point George demonstrated his cat like reflexes as the roads had been “gritted” in the heat and the gravel was treacherous. The route then took us to a further cross training exercise where our members were invited to carry their cycles over Bidston Station metal pedestrian bridge. Oh how those of us with featherweight bikes laughed. The route now took a convoluted way to Landican where we joined Landican Lane a path used in fine weather by CER veterans.

At this point Neil decided to lead a masterclass in roadside puncture repairs. Only to find his tyre bead refused to be parted from the rim, despite two of us trying the bead would not budge. That was until “Iron Hands Heath” had a try and effortlessly removed the tyre. Following fitting the new tube Neil proceeded to bunny hop down the road to re seat the tyre! Staying on nice lanes we travelled through Thornton Hough, Raby and lastly into Little Neston for our start position. At this point Dave H and Neil left us to drive home and the remaining group continued on to their various homes. In keeping with the TDF we are all watching, the following jerseys were awarded at the end of the day

Thanks again to Alan for developing the route and leading the group.