It was overcast and a little chilly when we met at Rose Farm Café.  There’d been some light rain earlier, but the prospects for later on were bright. Several CER members were present, but the mods were thin on the ground. I had a ride in mind to Swettenham via the picturesque private lanes of the Davenport Estate, which appealed to Steve T. This was a little far to the east for Neil and Alan who had ridden in from west of Chester, and had alternative plans to ride to Wrenbury.  So, two mod rides set off, each with just two riders.

Steve and I set off through Cotebrook and headed towards Wettenhall before turning NE to Winsford, then Middlewich and Brereton Green. Here we took Route 71 along a bridleway towards Brereton Hall, with a tarmac surface which then turned to gravel. Crossing the A54, we took the private drive into the Davenport Estate over lovely rolling countryside and crossed the meandering River Dane. 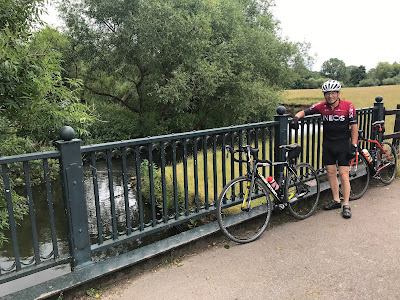 This deposited us beside the attractive setting of Swettenham Church and the Swettenham Arms at the relatively early time of 1220. We ordered our food and sat outside in the mild, sometimes sunny weather. Looking up the club’s records I believe I was last here in 2013 with George and others on a brisk ride led by Clive. That time Clive wrote about the “somewhat expensive repast”. Today we must have paid a lot more than then, but my fish finger sandwich with chips and salad came to £9, which isn’t far out of line with similar establishments.

Soon it was time to leave.  Our outward journey had been favoured by a north westerly breeze. We had more of a headwind for our return, but it didn’t cause us too many problems.  Our return was via Twemlow Green, Goostrey and Lach Dennis. At Shipbrookhill, we stopped for ice creams at Riverside Organics Café. Then to Davenham and Moulton, before taking the rough and surprisingly wet track downhill to cross the Vale Royal Cut of the River Weaver. We chose to ride along the Whitegate Way and onto Little Budworth, Cotebrook and back to our start point.

We’d covered 48 miles, on quite a few private roads and tracks, through some delightful countryside in pleasant weather. What better way to spend a summer’s day?