Summer riding – wet weather – windy weather and rather chilly is what we’ve experienced this week.

Today, riding out from Chester to Utkinton for our café start from Rose Farm, the weather at 0915 was quite chilly necessitating a gilet and worn until midday. !! On arrival at Rose Farm, we had missed the announcement of the day that our PM had reluctantly decided enough is enough. MPs are like a herd of something or other stating once one resigns, they all follow – a little like cyclists.

Today, we have a new brisk rider, and we welcome Richard, and also out today was Clive who completed the Vets' 100 in double quick (16mph avg.) time on Sunday then rode with me to Sandbach in drizzling rain and 30 miles of a strong head wind on return to Chester and another day of plus 16mph average over 75 miles – and he is soon to get a new carbon bike so Wilkie look out!! also there was John W, Nick, and myself.

Five brisk riders set off on an overcast morning and all wearing warm clothing. From the café out via Tarporley then Eaton and the usual route to Church Minshull and Middlewich. From Warmingham Lane and crossing over the main A533 road, we ride on Cledford Lane which we normally ride to Breton Green but today we head along Broad Lane towards Holmes Chapel. As a native of Sandbach, I had never been along this lane and quite enjoyed the new experience. We exit onto Middlewich Road and into Holmes Chapel then pass-through Cranage and taking the lanes towards Twemlow and Siddington.

I had put the route together early in the week and with Clive's assistance he “smoothed the bumps out of my route, but soon we are heading up a long drag from Siddington via Henbury and Hare Hill part of the National Trust land. It is another new lane for us, and we stop to take a photo shoot out to Bollington and to the Peak district and the concrete of Stockport. The road surface from here to Alderley Edge leaves a lot to be desired as it was very potholed. 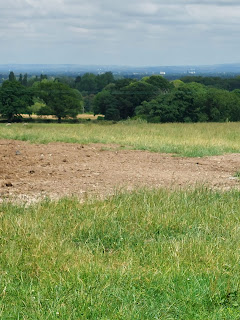 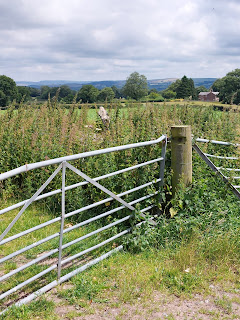 Arriving in Alderley Edge, we visit the Village Café on the main street and were seated outside in now warm sunshine. Service and menu were good and considering where we were, it was excellent value and with drinks and tasty food at around £10.00

We depart from the town along Chelford Rd. And heading out to Ollerton towards Lower Peover. On the outskirts of Middlewich again at Byley, we are overtaken by a white van when going under the railway bridge. He was going too fast as approaching cars were also close to us and he swerved in in front of John and I causing us to brake hard to avoid being knocked off. Obscenities flowed forth and the guy stopped. Oh, I thought, he is going to wish he had not stopped with our hand grenade warrior on hand but when we stopped alongside his van he only stopped to apologise. That is a first.

On we go through Middlewhich to Winsford and the drag up to the top of the town and along the regular Winsford road to return to Rose Farm circuiting the Oulton Park circuit to Cotebrook and on to Utkinton. The attached circular route will provide you with a pleasant ride covering 68 miles with only the one hilly section as reported.

Clive and Nick had driven out for today's ride, but the three returning riders covered the addition 20+ miles to and from Chester. Well done to Richard for joining us today and I hope he joins us regularly as he is certainly a good rider and enjoyable companion. He had not expected to be riding between 90-100 miles on his virgin ride with Easy riders!!

John carried on with a ride to give him another 100+ miles.

Again, we averaged 16.5 over the day even though we endured a good percentage of head/side wind to toil against. But enjoying the tail blow when we had one. So, until next week have a good weekend and thanks to my companions for an excellent day out.