The sunny weather certainly brought a big CER crowd out to Lewis’s in Farndon, and it was good to see Ken out. While the moderates had the tricky job of divvying up the numbers, the brisk group was a straightforward team of John W and myself. For the sake of quickly deciding a route I offered my 56 mile round trip to Ellesmere. As there was initially no route to actually follow (the route was based on a start/finish in Tilston), we set off through Holt and down to Cross Lanes, and of course missed the left turn to Bangor on Dee, resulted in an extra few miles. From then on the ‘usual’ route was followed to Overton, but before arriving at  St. Martins, we turned left onto quieter roads. Instead of taking the B5068 directly to Ellesmere, we crossed to cycle some lovely lanes to the south, eventually heading on to Ellesmere itself.

Against John’s advice favouring the Texaco garage, we headed to the lakeside café for lunch. As this was only doing menu-based meals and the kiosk not serving very much at all, we back-tracked to the garage for a welcome sausage roll. 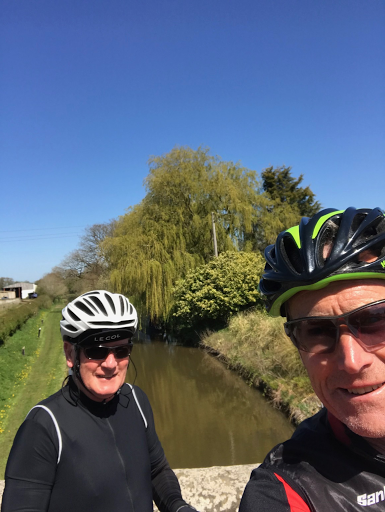 Leaving Ellesmere to the east, we passed a strung out group of cyclists – one of the moderate groups! We then headed around the Fenns, Whixall mosses on excellent roads to Bronington. Leaving here towards Hanmer, the road was truly awful, deep gravel, and probably unpassable in winter (thought I’m sure Clive would give it a go!)

Hanmer in the sun proved a nice stop for an ice cream while we watched a couple of open water swimmers freeze in the lake. From there, it was a well-ridden route northwards towards Threapwood and then on to Tilston, completing a 54 mile route, where I left John to go onto 80 or so miles.