A dozen riders turned up at the Castle Bistro in Chirk, a good showing for this venue some distance from Chester. Dave M had come only for coffee and was riding home, but the rest made up the brisk and two moderate rides of the day. Steve Haywood had come armed with a ride to the Burlton Arms at Burlton and I had dug out a ride down to Ye Old Three Pigeons at Nesscliffe. After some discussion, Steve went off with Dave H, Steve Hu, Alan and Peter, leaving Mike G and Andy with me for the ride to Nesscliffe.

We took the standard route out of Chirk to the A5 roundabout and then took the lane down to Hindford, passing the holiday cottages at Henlle Park. As Steve Haywood has also reported, the lanes between Hindford and Welsh Frankton were pretty rough, but after such a long dry spell, we were challenged by potholes, hard mudbanks and deep gravel rather than by puddles and deep, wet mud. I’m not sure which is worse.

Soon we were whizzing down the lane from Lower Frankton, over the Montgomery Canal and into Hordley and Bagley. The smooth and quiet lanes of Shropshire were a delight as we made our way through Weston Lullingfield and Baschurch, arriving at Nesscliffe soon after mid-day.

Ye Old Three Pigeons was well set up for dining outside with plenty of tables on the patio and a covered area in the garden where a group of young mothers were celebrating someone’s 32nd birthday. Can any of our members remember our 32nd?

Lunch was preceded by drinks, with Mike and Steve indulging in Three Tuns, our first taste of hand-pulled beer in over a year - delicious. Lunchtime conversation turned medical and it seems that all three of us are ‘pixies’ – those taking apixiban anti-coagulant medication – as a result of clots or potential clots. 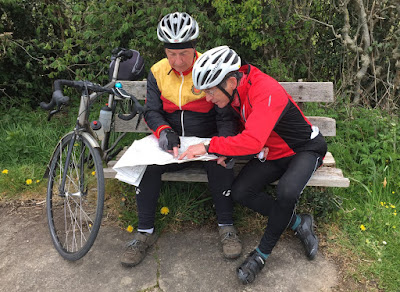 As we set off back, Mike volunteered to adapt the homeward route to go a bit further west before heading north into the wind, so we headed to Melverley, via Wilcott and Pentre. The intention was to visit St. Peter’s, the ancient timber framed church which sits right next to the River Vyrnwy. Unfortunately, there was a funeral in progress when we arrived, so we had to give it a miss. Next time, perhaps.

The route back took us along some beautiful and quiet lanes running close to the Vrynwy, before re-joining my originally planned route just south of Ball. After passing the industrial estate south of Oswestry, we threaded our way through housing estates, emerging on the north side of the town on cycle route 455 near the Old Oswestry fort.

By now it was turning chilly and rain was threatening. Fortunately, it held off until we were dropping down from Weston Rhyn into Pontfaen, so we had only the short climb up to Chirk to put up with it.

A very pleasant 46 mile ride on a bright if chilly day. Thanks to Mike for leading on the return leg and to Andy and Mike for their company and support.