Ivan and John W had been out to the Welsh hills only recently, where the last 25 miles mainly consisted of most of the 6000ft of total climb. So I was surprised to see Ivan’s suggestion for today’s ride out of Chirk. The route was a modest 53 miles with 3000 ft of climb but crucially there was the 12% section over a third of mile up to Selattyn, and the 14% climb over a similar distance at Llanyblodwel. I had indicated to Ivan that "a nice flat route to Shrewsbury would be appreciated today" and this is what I got! So I was in two minds that I might have to detour these hills on the fly.
So we set off to Weston Rhyn to climb the oddly named Station Road into the centre of Selattyn. So far so good. The downhill run onto Oswestry was restful as was the exit to Trefonen via a 8% climb to the B4396 towards Llanyblodwel. This surprisingly English village sits in the lovely valley of the Tanat River. There are timber-framed cottages and a pub. The church is stunning and we stop to photograph and admire its octagonal based spire which is topped out in curved stonework.
It is Grade I listed so see here for more info. 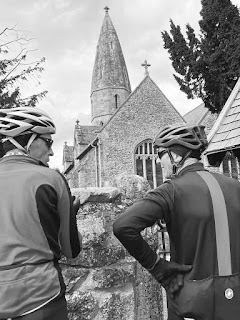 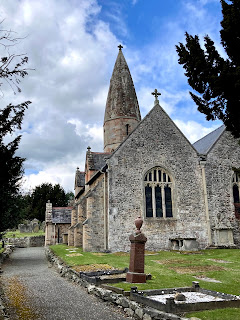 The only way out unfortunately is up and over the hillside. This means a double chevronned initial ascent followed by a longer single chevronned section. I decided that the valley was better viewed at a walking pace! In Llansantffraid-ym-Mechain, I recognise the left turn towards Four Crosses. No major hills now Ivan assures me.
The view in front  of us as we head for Crew Green is dominated by Breidden Hill (366m) and the tower on the top is known as "Rodney’s Pillar”. See here for more info.
Back across the River Severn, we are bound for Shrawardine via Nesscliffe Training Camp. Here, Ivan relying on his Garmin routing, takes down a scruffy lane that ends up in half a mile of the Shropshire Way.  We were lucky the weather had been dry for a while, otherwise the mud would have been horrendous. BTW - I have used a perfectly good lane to avoid this in the past!
Montford Bridge comes up at 32 miles as we ride over the A5 and then a long a short section of it to access the picnic and rest area where there is a well-established truckers and bikers cafe with loads of outside space. We sit under cover by a radiant heat lamp where the helpful sign urges customers to "use the ashrays when the floor is full”. The food is plentiful and very much needed after the cold of the Welsh hills.
The route back is a near straight track NE through glorious Shropshire countryside down long lanes. No time to stop in Rutyon-XI-Towns as Ivan and John shelter me frorm the northerly winds as we hit Queen's Head. There is then the long drag towards Babbinswood and Whittington before hitting Gobowen. Ivan heads right round the roundabout as I shout out “Turn Left” - which is the way indicated as his route. Ivan and John catch me up as Ivan explained he wanted to go to St Martins. I said that was definitely out as it was an unnecessary “up”.
We are back in Chirk a little after three o’clock and decide to head homewards towards Chester only to enjoy a massive traffic jam on the outskirts of Chester due to an accident on the A55 by-pass. Nonetheless, I survived the day and rather pleased I persevered with the ride. So thank you Ivan for the route and John for the wind sheltering throughout the day, and all at a surprising 15mph average.