A good number of members turned up at Lewis’s of Farndon, well over 20 was the guess. Lewis’s was chosen because Covid restrictions in Wales had ruled out Cleopatra’s, the scheduled venue for the day, though Lewis’s gave us a very good welcome. Sun was forecast for the whole day, but unfortunately the seats at the front in the sun were already taken, so we gathered at the side. Among the members here was Ken, who we were all pleased to see out again, though he was cycling back home.

Confusion initially reigned over who was going with whom to which destination, though in good CER fashion, eventually three mod routes emerged led by Neil, Dave H and myself.  There was scope for further confusion as both Dave and I were headed to Whitchurch. I led off with George, Mike G and David M. We first headed south for Shocklach and then Cuddington Green to approach Malpas from the west. It was a pleasure to join a virtually traffic-free B5069 as the road was still closed to traffic by St Oswald’s in the town – the second time in two meets I had led along this stretch.  In the town we had our first stop for delayering:  despite the sun, it was a cold start and we had a slight headwind, so extra layers had been initially worn.

We left Malpas and took the road to Higher Wych, then turning by Iscoyd Park to pass by Whitewell Church and the only stretch of really rough road on the route (it wouldn’t be a proper CER ride without some bad surfaces). Somewhere along this section I had the rare sight of a hare crossing in front of me.  The days where there was ‘a hare in every field’ are long gone. Crossing two A roads, we passed Alkinton Hall and headed into Whitchurch.

Now I remember Dave H saying that he had phoned the White Bear in Whitchurch to check it was open and I remember him saying there was an outdoor terrace at the back.  I therefore headed to a pub I remembered had a terrace.  This turned out to be The Wheatsheaf, which was closed.  Consulting locals, we were told of several possible pubs. We tried the White Bear, which indeed was open, but not selling food.  The Black Bear, an old favourite was not due to open until May 17th.  Someone had suggested the Horse and Jockey, said to be “close”, but actually out by Grindley Brook.  We concluded that a pub was out, but there were plentiful cafés to sample. Food and drink having been purchased we settled on the steps outside the Civic Centre in the sunshine. While here, we saw Dave H’s party arrive, but they went their separate ways.  Before heading off, more delaying took place, and bare legs were seen. 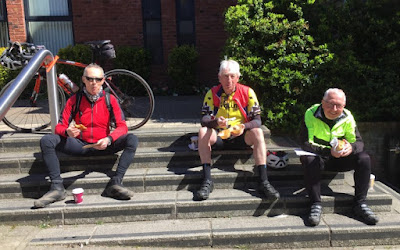 From Whitchurch, we took a traditional CER exit, travelling the wrong way up Claypit Street, then on to Wirswall. I notice that we pass a house called "Witts End". At Wicksted Hall we paused to take in the wonderful view over Marbury’s St Michael’s and Big Mere. We crossed the A49 at Bickley and took the road up to Cholmondley Castle, where David M left us, and then on to Hampton Post (and a final shedding of clothing). Most of the return was very pleasant with the sun and the wind behind us, and from here it speeded up as we passed though Duckington and Tilston.  Finally, Wetreins Lane took us back to Farndon and Lewis’s.  Here waiting for us were Neil’s party, and, a pleasant surprise, Dave and Liz Pipe with their tandem.

Only 37 miles travelled, though on a really good ride with excellent company and conditions.