Steve Tan, Dave Matthews, George, Steve Hughes, Mold Andy and myself were the potential moderate group. It was good to chat to Nick and Ken. Ken has made a successful recovery from his lymphoma and subsequent gruelling treatment, but still has to be particularly careful to avoid Covid. Amazingly, Steve Tan had turned up for a short ride after spending three days in Warrington Infirmary! The moderate group who were available for the day's ride consisted of George, Steve H, Andy B and myself.

Heavy rain was likely, so I asked the troops if a meandering route to The Spinner and Bergamot at Comberbach was acceptable, on the basis that a short, quick return route was then possible if the heavens opened. My suggestion was accepted, and we headed for Acton Bridge via Norley Hall, Crowton, Ainsworth Lane and Cliff Lane. Steve Tan had visitors due midday, apart from any health concerns, so soon spun off for home.  From the A49 crossing of the Weaver Navigation we rode north-west, passing the impressive, but discretely screened, Cogshall Hall. Proper little quiet lanes led to picturesque Higher Whitley with its attractive duckpond in front of the handsome, old farmhouse. We continued to use off-piste narrow lanes towards Whitley Reed and on to Barber's Lane, crossing Arley Lane. I was able to point out the hangar at the bottom of a garden where two vintage German planes were housed. The weather was a bit minty for private flying, but perhaps we will be lucky and see them in action in the future. We circled back south passing Garland Hall, Crowley Lodge and the Georgian Pole House before reaching Comberbach.

Lunch was very good at The Spinner and Bergamot after clocking up about twenty-three miles.I should have ordered something smaller, as I couldn't finish it in good time. Steve volunteered a small plastic bag, and my daughter's dog thereby enjoyed some tasty lamb for tea. 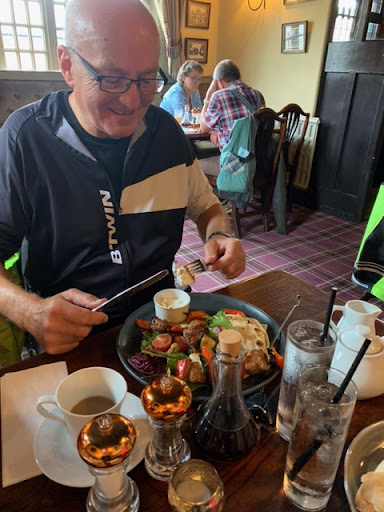 Dave's 'lite lunch'
The weather looked good when we remounted our bikes, so we headed away from home through Great Budworth and  close to Pickmere before cutting through the grounds of Arley Hall. We then turned south back through Antrobus and Frandley, and rode alongside the river to Dutton Lock. 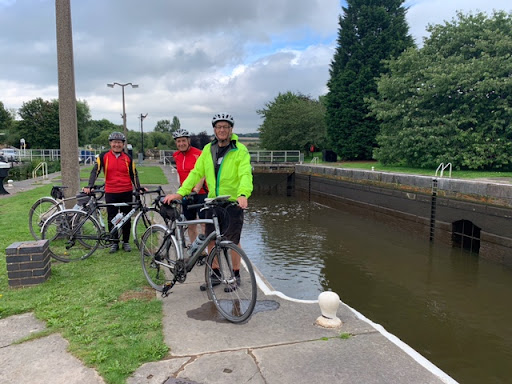 Dutton Locks
Photos by SHu
Here we crossed and proceeded through banks of colourful wild flowers with Pickering's Cut on our right. A pleasant diversion, and a 'first' for Andy and Steve. Stiff climbing from The Weaver can't be avoided, and we headed straight up the quiet, little lanes of Crewood Common Road, Beech Lane and Forest Lane. We had not suffered any serious rain to until then, but a heavy burst had us sheltering under some big trees for a few minutes. We were near Hatchmere at this point, and three of us had vehicles not far away, so we avoided a proper soaking. Andy, however still had to ride to Mold. The route was about 45 miles.
DH
See route map and/or gpx file download
Posted by Steve Tan at 10:44