As always there was a warm welcome at the Gallery Cafe in Hawarden. A fast group of four were debating their destination and the mod group were still enjoying the coffee.

Alan advised he had an off piste route from Hawarden eg not out amongst the hills. The destination of the Royal Oak was suggested and seized upon by the flat riders.

So a mod group consisting of Steve T , Steve Hu , Andy, Alan, Peter and Mike G. As we left Hawarden Mike G let it slip he had just ridden in from Rhos only 37 miles, whilst Andy had been conducting hill reps up Tinkersdale road to warm up. The scene was set for a brisk day!

The route took us up out of Hawarden only to stop at an unknown grave near Shortly. From here we headed for Rossett; on arriving at Rossett we were advised on the need to climb Marford Hill, this went down well. From here the route took in some fantastic small lanes before arriving at Cross Lanes. Unfortunately Steve Hu new bike decided to present a slow puncture. at this point the entire group were privileged to witness a masterclass in puncture repairs. 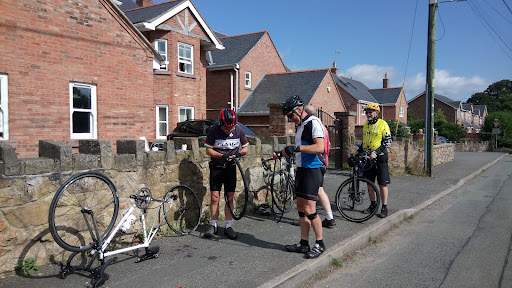 Photo by ST
Some bystanders said “at no time did Steves hand leave his wrists”, repaired and ridiculed we set off again. 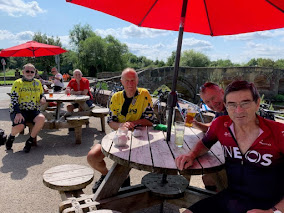 Photo by SHu
A quick blast on Bangor road brought the Royal Oak into view. A splendid lunch left us ready for the ride back to Holt , riding back through Bowling Bank Sutton Green and finally Francis road we arrived at Holt.

With the Elite rider group currently baying for more we made quick progress to Kinnerton where Peter departed. The group of five then battled the A road to Handbridge where 5 became 3 as Mike left to set off to Rhos and Alan decided to remove his crank arm whilst doing 25 mph!. Lots of multitools and we were off again , around Handbridge , the Dee path and finally Hawarden for a well deserved rest. The mileage was 47 miles at a respectable 13.3 mph.