I arrived at Meadow Lea to see a big turnout of CER club members, predominantly ’Mods’. Ivan, Clive, Nick, Ray  and John M were all absent with alternative tasks. This left Ken and new rider Matt and myself to ride a brisk ride today.
Plan A: Was to ride half of an Audax 200k ride, going to Wilmslow, under the runways and back. This changed to Plan B: i.e follow compass into wind & make up as we go.  Ken was out today as well and due to fact that Ken was having to be home early, plus having another ride tomorrow, Plan B was adopted. We decided on a loop around Holt and let Ken cut out, with myself & Matt to continue.

So left out of ML, we pass & wave to ‘Mods’ following compass into wind, over the busy A51 to Waverton & familiar roads to Tattenhall (where Ivan is busy decorating for his daughter). Up Rocky Lane to cross A41 to pass Coddington & Barton, before Holt and straight past Cleopatra's (I will save up for stop next time!). Saying farewell to Ken here, he was riding strong after his great recovery, he cut out for Rossett & home.
Matt & I continue into a strengthening headwind on Borras Road, with a poor surface and progressively testing inclines, trying to be aero, towards Wrexham.  A short stop for fluids leads to temptation, with chip butties at Borras Park Fishbar; suitably refreshed, we head to, then pass Gwersyllt, the one time meeting place for CER many moons ago, now solely for Wrexham Reivers & Cafe Hoppers on Saturdays.
Heading North, towards Llay, zig-zagging passed & down Higher/Lower Kinnerton and through Bretton to thankfully head East on A5104 with a great tailwind on the newly surfaced cycle path, then turning off to cross the Dee onto Ferry lane and home for me, while Matt continues on the Millennium home.

I was asked what  I carry in my saddle bag - see picture - the Kitchen sink is just out of shot! 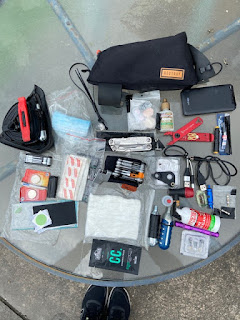